Today’s post is by L. M. Merrington, an Australian writer of Gothic fiction. Take it away, Lou!

Two years ago, almost to the day, my first novel, Greythorne, was released. Because I had a contract with a digital-first imprint of one of the Big Five publishers, I (naively) thought that this meant they’d take care of a lot of the marketing. I quickly discovered, as plenty of debut authors have, just how wrong I was.

Fast forward two years and I’m about to release my second novel, The Iron Line, which is out on 4 December. A lot has happened in the intervening time – the imprint I was with closed down, leaving me with some big decisions to make. I eventually got my rights back and, rather than pursuing another traditional contract, chose to go indie. (If you’re interested in reading more about how and why I came to that decision, I recently wrote an article about it for online magazine Inside Story). In terms of marketing, this means I’m now completely on my own, but I’ve also got far more freedom than I had before.

There’s so much out there about book marketing, especially for indie authors, and especially using online tools like email lists or Facebook and Amazon ads. I don’t want to rehash that here; rather, I just want to share a few of the things that have worked for me over the last two years. I’ve discovered a lot of this through trial and error, and growing an audience for your books is a slow process. But the main thread that’s come through for me is the importance of relationships and authenticity.

Networking has always been a major factor in my career success outside of writing, and I’m finding that it’s exactly the same in Book World. By networking I don’t mean getting up in people’s faces and selling aggressively, but rather establishing and maintaining relationships with people who are genuinely interested in what you do. These can be online, in person, or a combination of both – one of my first speaking gigs as a published author was via Skype with book club members at a public library in Ohio.

In fact, one of my most fruitful ongoing marketing efforts has developed as a result of networking. While I was writing Greythorne I happened to get back in touch with my former English teacher, who is still teaching at my old high school. I asked if she’d beta read for me, which she did, and after the book was released she invited me to give an author talk and run a writing workshop with students. Based on the success of this, Greythorne was added to the Year 8 reading list – although it’s not strictly a YA book, it has a young protagonist and themes suitable for teenagers.

The teachers also encouraged me to run a workshop at a conference for Victorian Association for the Teaching of English, and an attendee at that workshop subsequently got Greythorne added to the Year 8 reading list at her school. In addition, I was also contacted by a parent of one of the students, who had contacts in the film industry and was interested in passing the book on to them for consideration. So you just never know where things might go. I hadn’t initially considered teachers as part of my marketing plan, but now I see these relationships as invaluable.

Over the last two years I’ve built up quite a few supplementary materials for Greythorne, aimed at libraries, schools, and journalists. These include book club notes, teaching notes, and a media kit. All of these provide extra information about the book (in the case of the notes), or about me (in the case of the media kit), and they’re all available for free on my website. Teachers and journalists in particular are very time-poor, and are more likely to engage with your book if you’ve already done some of the hard work for them. A Canberra news site, The RiotACT, recently published an article on my new release using material drawn almost entirely from my media kit.

Say yes to opportunities, even if they’re a bit outside your comfort zone, and you’ll be amazed where they can take you. Give talks at libraries (or schools, or nursing homes); do interviews with local media; run free writing workshops with your local community; write guest blog posts or articles; attend conferences and markets; and give your readers some way to contact you (and of course make sure you always respond). And ask the people you interact with if they know anyone else who might be interested – word of mouth is a powerful thing. When I was still with a traditional publisher, I sold considerably more books myself than the publisher did, even without access to online promotional tools. In the two months since I’ve gone indie, I’ve sold more paperbacks than the publisher did in a year.

For many authors, the idea of getting out there and spruiking your wares is terrifying, and as an introvert myself I can understand that. But I also see it as a huge privilege that people even care about my little book and want to hear more about it, and I love interacting with readers. There are also so many organisations – especially libraries, schools and local media – who are keen to support local and emerging authors, so they’re relationships that are really worth building.

I believe it’s a very exciting time to be an author – we have more options and opportunities to reach our readers than ever before. Marketing shouldn’t make you feel uncomfortable or scared; you just need to find a way that works for you. 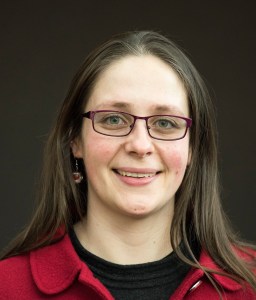 L.M. Merrington was born in Melbourne, Australia. She holds a Bachelor of Arts in media and communications and Chinese, and a PhD in international relations. A former journalist, strategic analyst, and university communications manager, she currently runs her own business, Pure Arts Communications. She is also the author of a non-fiction book, Communications for Volunteers: Low-Cost Strategies for Community Groups, released in early 2017. She lives in Canberra with her husband, Tristan. Her first novel, Greythorne, was published in 2015, and her new novel, The Iron Line, will be released on 4 December 2017. Her website is www.lmmerrington.com.